University of New Mexico Hospital (UNMH), the state’s only academic medical center, is the primary teaching hospital for the university’s School of Medicine. UNMH cares for a large, diverse population with complex and urgent health needs, with more than 491,000 outpatient visits annually. Many more patients benefit from the UNMH telehealth network, which provides care to rural communities statewide. 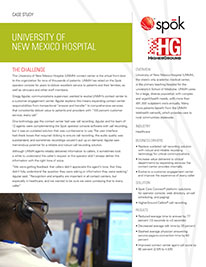 The University of New Mexico Hospital (UNMH) contact center is the virtual front door to the organization for tens of thousands of patients. UNMH has relied on the Spok operator console for years to deliver excellent service to patients and their families, as well as clinicians and other staff members.

One technology gap the contact center had was call recording. Aguilar and his team of 12 agents were complementing the Spok operator console software with call recording, but it was an outdated solution that was cumbersome to use. The user interface had check boxes that required clicking to ensure call recording, the audio quality was substandard, and sometimes recordings wouldn’t pull up on demand. Aguilar saw tremendous potential for a reliable and robust call recording solution.

Although UNMH agents reliably delivered information to callers, it sometimes took a while to understand the caller’s request or the operator didn’t always deliver the information with the right tone of voice.

“We were getting feedback that callers didn’t appreciate the agent’s tone, that they didn’t fully understand the question they were asking or information they were seeking,” Aguilar said. “Recognition and empathy are important in all contact centers, but especially in healthcare, and we wanted to be sure we were conveying that to every caller.”

"Recognition and empathy are important in all contact centers, but especially in healthcare. "

In 2017, Aguilar reached out to Spok to find a more intuitive solution for his team, and Spok recommended its partner HigherGround. HigherGround offers a reliable and full-featured call recording solution called Calibre to record, report, and analyze calls and associated multi-media interactions, as well as provide management with superior training capability using quality assurance tools.

“Both healthcare and public safety are in the business of critical communications,” Aguilar explained. “The solution was so intuitive and worked virtually flawlessly for these life-saving professionals, so we knew this was the answer for us.”

With Calibre, Aguilar can search recording by operator, extension, console name, or a date or time range. Additionally, he can jump into the recording at any point. For the first six months with the solution, Aguilar focused on the calls that resulted in negative feedback from the caller. Before Calibre, he would often have to take his agents’ word for how they handled the call. Now, he could hear for himself and determine if the operators needed further training.

“It was astounding—all 12 agents, 100 percent said ‘Wow, I didn’t know I sounded that way,’” Aguilar said. “It was an immediate gamechanger. They now have a much better understanding of our customers.”

Now, agents request the feedback so they can continue to progress. Aguilar pulls random calls on a routine basis and sends the recordings to agents with feedback for improvement. Calibre allows him to grade and score calls and other interactions and provide coaching notes. In addition to tone of voice, they’ve zeroed in on keywords they want to use consistently and eliminated a lot of ‘ums’ and ‘ahs’ from conversations.

Expanding to the Clinical Team

With his agents trained, Aguilar decided it was time to expand and improve the services the contact center provides to clinical departments. The UNMH contact center provided after-hours physician answering and paging, but the workflow required the operator to take a handwritten message, dial the pager, listen for the tone, and enter the message. When the physician returned the call, they were put in the general queue, mixed in with external calls.

With the Spok operator console and Calibre, UNMH pages physicians more quickly with pre-defined templates and automatically diverts return calls to a specific operator who answers high priority calls from the physician. As a result, UNMH reduced the page-to-connection time by 60 percent.

In 2019, UNMH began answering all external and internal calls to its Emergency Departments. Previously, all calls were going directly to ED locations, which were not adequately staffed for the call volume. A survey of patients who called the ED revealed that 75-80 percent of complaints were because the caller wasn’t connected at all, and of those who were connected, 90 percent were unable to get to the right place or obtain the right information.

UNMH was able to centralize emergency calls with Spok: The contact center agents know when a call is intended for the ED and can quickly deliver information to that patient or family member. Additionally, Aguilar pursued getting each patient care “pod,” or exam room, in the ED connected to the contact center. Now, when a family member asks about their loved one, the agent can see that the patient is in exam room 15, tap that into the Spok operator console, and do a warm transfer to the nurse assigned to that room.

This addition led Aguilar to leverage Calibre to provide feedback to nurse leaders as well: Not all charge nurses were happy about answering these new calls, and some calls were ignored and others receive terse responses. When Aguilar raised the issue, the nursing leaders initially pushed back, saying that they didn’t believe their nurses were ignoring calls or speaking to patients in an unsatisfactory manner. With Calibre, Aguilar could prove it.

“Once they heard it for themselves, the nurse leaders said ‘you know what, we’re going to work on it,” Aguilar said. “To deliver excellent customer service, everyone needs to be representing the mission of UNMH in every call.”

With the right technology and ongoing training for contact center agents and others who frequently interact with patients and their families over the phone, UNMH achieved impressive results:

Beyond these quantitative results, UNMH has also retained talent in the contact center and increased agent productivity, expanded its ability to provide services to other departments, improved patient satisfaction scores, and provided a better all-around customer experience internally and externally.

“If you don’t have call recording, you’ve already waited too long and need to get it,” Aguilar said, “Nowadays, you’ve got to have it; you’ve got to hold your agents—and everyone in your organization—accountable to the way they interact with patients. You can leverage it again and again to provide a better patient experience.”