The Benefits of Wide-Area Paging

Paging has long been the cornerstone of critical mobile communication. Even today, no mobile communication technology is more reliable, survivable, and affordable. Wide-area paging systems provide effective wireless coverage on the ground as well as superior in-building coverage.

Paging networks provide redundant wireless coverage on the ground to serve the coverage needs of its mission-critical users. As emergency events often involve physical damage to property (including wireless transmitters), having overlapping coverage is critical for continuation of service. With the paging network architecture, all messages are “simulcast” from multiple towers within a specific coverage zone at the same time, so pagers are communicating with more than one tower at once. If one tower goes down, other paging towers in the area can still receive messages. Cellular networks are not designed with such redundancies. 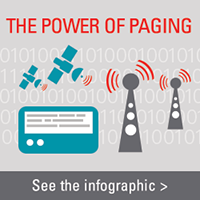 Superior Coverage from 300 Feet Above the Ground

Paging transmitters are high off the ground (up to 300 feet compared with approximately 90 feet for a cellular tower), and transmissions for paging service utilize high power, resulting in superior in-building coverage. Paging transmitters operate with an effective radiating power (ERP) of up to 3,500 watts. For comparison, cellular transmissions have an ERP of approximately 100 watts.

Paging networks use satellite connections between the core messaging network and transmitter towers in the area, eliminating a critical point of failure for many wireless systems. Because data is transmitted back to the network via satellite, the local public telephone network that is often impacted by a disaster situation (such as hurricanes or other violent weather) is bypassed. In addition, the satellite dishes are easily accessible should technicians need to restore power using a generator or re-point the satellite dish.

The core elements of a paging provider’s network can be designed with fully redundant infrastructure, including diversity on WAN/LAN, messaging switches, power sources and satellite uplinks. This redundancy is intended to help ensure operational continuity of all network systems and provide an extra layer of reliability.

Spok offers a one-stop-shop for hospital pagers, hospital paging transmitters, and hospital paging terminals. This helps you save money and reduce the frustration of integrating equipment among multiple manufacturers into communications platforms in areas such as a hospital contact center. Learn more about our complete onsite paging solution.

Secure Communications in Healthcare: Do You Know All Your Options?