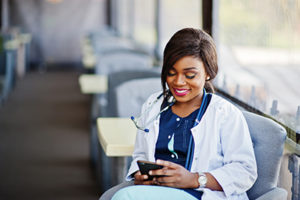 Most people within healthcare are well informed about the nursing shortage: There are not enough nursing graduates to keep up with rising demand driven by a rapidly aging population, and the imbalance is projected to last through at least 2025 according to the Bureau of Labor Statistics.

However, there is another shortage that most are not talking about in the industry, and that’s the lack of nursing informatics leaders. Nursing informatics, a field that bridges traditional nursing with technology expertise, was first recognized as a discipline by the American Nurses Association in 1992. The first chief nursing informatics officers (CNIOs) began to emerge at hospitals and health systems roughly a decade later.

However, CNIO growth has stalled. According to the 2017 HIMSS Nursing Informatics Workforce Survey, nearly one-third (32 percent) of respondents said their organization had a senior nursing informatics executive. That sounds pretty good, until you consider that percentage grew just two points since the previous survey conducted three years prior. The chief medical information officer (CMIO) role was once new in the C-suite as well, but rose to prominence more quickly.

There are thousands of nursing informatics roles in the U.S., and the majority have been in their positions less than five years and have a high degree of job satisfaction (80 percent are ‘highly satisfied’). There’s clearly strong interest in the field, yet few nurse informaticists are making it to the top. Hospitals need to seize this opportunity to develop strong nursing informatics leaders within their organizations—our ability to improve patient care in the 21st century depends on it.

The Challenge: A ‘Choose Your Own Adventure’ Career 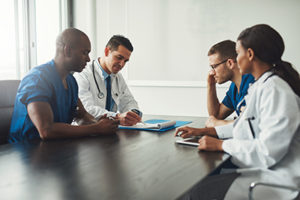 Perhaps the biggest issue with advancing nursing informatics is the lack of a well-defined path to support nurses who have an interest in technology. Most nursing informatics leaders, like myself, had to completely chart their own course. There are few training or leadership programs to support nursing informatics, so many break in by thrusting themselves into the fold by their own volition. Only 28 percent of respondents to the HIMSS Nursing Informatics Workforce survey had on-the-job informatics training. Further, respondents cited the biggest barriers to success as a nurse informaticist were a lack of administrative support and staffing resources. Respondents citing lack of administrative support as the top barrier actually increased from 17 percent in 2014 to 21 percent in 2017.

Similarly, the top sources of information for day-to-day informatics activities were networking with peers and digital sources. It’s apparent from these statistics, the countless anecdotes I’ve heard through the years, and my own personal experience that choosing a nursing informatics career is a lot like choosing your own adventure. You can expect that there won’t be signposts pointing the way, or a strong understanding from hospital administration of what you do and the value you bring. 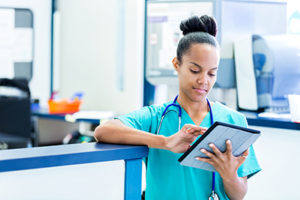 We can, and must, do better. There is a growing need for nursing informatics leaders: In a recent survey of registered nurses by the University of Phoenix, 43 percent of RNs cited increasing involvement with information systems as the most anticipated change for their profession. What will we do to prepare for our future?

If you’re a nurse:

Consider getting involved in a nurse advisory council. This could be within your own organization, advising on technology changes within the hospital, or in a consultative role with one of your key technology vendors. Be on the lookout for training, testing, and other professional development opportunities, and if they’re not there, try to create your own by bringing your healthcare IT observations to leadership. You can even start a conversation about technology within your safety huddles. It’s less about title and more about getting your feet wet and feeling empowered to bring your innovative technology ideas to leadership. Nurses are on the frontlines of care—why wouldn’t we be the ones to spearhead change!

If you’re a hospital or health system leader:

If nurse recruitment and retention is a priority for your organization, consider evaluating the paths for nursing informatics. How could those avenues be expanded and lengthened? So many nursing informatics professionals leave for healthcare IT vendor positions, as I have, because they felt they exhausted their development opportunities in the clinical setting. What can you do to invest in informatics pathways to retain those nurses? We need a sustainable model for nursing technology education and opportunity to nurture those who want to explore something outside of the traditional bedside nursing role. Finally, it’s often difficult to quantify the ROI of nursing informatics roles, and at too many hospitals, nurse leaders have to fight to keep them on the payroll. No one questions the role of the CMIO, and we must move from justifying the CNIO role to fully accepting it.

Save a Seat at the Executive Table for Your CNIO

With experienced nursing informatics leadership, we can better understand the voice of the patient and drive the technology adoption and optimization efforts needed to improve care delivery. That leads to happier patients, and equally important, happier staff because they’re evolving professionally and helping to advance patient care in yet another way.

What’s the state of nursing informatics at your organization, and how are you nurturing tomorrow’s leaders? I’d love to hear from you.