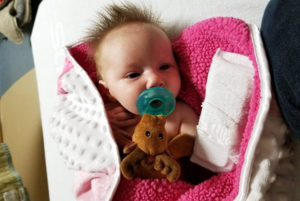 As most parents would when their one-month-old baby has a mild fever and cough (during the weekend, of course), I found myself headed to the local emergency room with my daughter in tow. The doctors and nurses poked and prodded my tiny 10-pound baby and quickly determined she had respiratory syncytial virus (RSV).

Since my daughter was so young and had low oxygen levels, the ER physician and on-call pediatrician decided to admit her for observation. What I thought was a quick trip to the doctor soon turned into a six-day hospital stay.

Fortunately, she did not require any medication throughout the stay, but she was given oxygen and monitored 24/7. As you can likely imagine, one-month-old-babies are masters at pulling out nasal cannulas and wiggling the oxygen sensor off their little toes. The sheer number of beeps coming from her patient monitoring devices was overwhelming to me—to say the least. Not to mention to the nurses who were responsible for her care, in addition to other patients across the floor with just as many beeps and buzzes coming from their bedside devices. 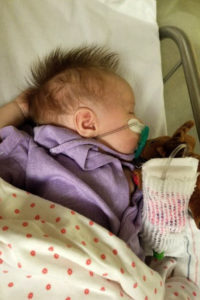 Sitting next to the patient care devices the entire stay, I quickly learned what each beep meant, when to be worried, and/or if I could do something to fix it myself. Simply putting my daughter’s nasal tube back in or finishing a diaper change would often resolve the alarm. Many times, the nurses would still have to make an unnecessary trip to the room to make sure everything was okay.

I also noticed my daughter’s oxygen levels tended to drop below the acceptable threshold when she fell into a deep sleep – only to have the beeps wake her up. There were countless times the care team tried to lower her airflow because she was doing so well when they were in the room (and she was awake), only to have the alarms go off again when she slept. I found myself being the one to communicate this trend with the incoming nurses, respiratory therapist team, and doctors to ensure she got some quality rest.

As a parent at the bedside, I had no idea who else could hear the alarms or if the staff were monitoring her levels elsewhere outside the hospital room. This was extremely evident to me as I watched my daughter’s oxygen levels reach their lowest for several consecutive minutes. The audible alarm sounded and I found myself frantically checking to make sure everything was hooked up properly.  I waited as patiently as possible and no one came. I finally resorted to pushing the nurse call button to ask for help. The nurse came a few minutes later and increased the oxygen flow to get my baby’s levels back into the acceptable range. 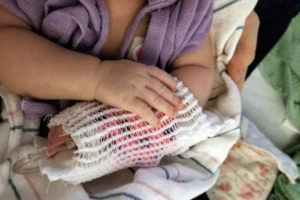 Working in the clinical communications and collaboration space, I know alarm management software could have helped simplify the communication of these alarms and even aided in reducing alarm fatigue among the staff.  With a solution like Spok Alarm Surveillance, powered by Bernoulli®, the hospital could have used a sustained smart alarm to filter out some of the non-actionable alarms and ensure the important ones were sent directly to the care team’s mobile devices.

For example, when my daughter managed to pull out her nasal tube resulting in low oxygen levels, it was only low for a few seconds because I quickly fixed it and the nurse did not need to make a trip to the room. In the instance of having to use the nurse call system to request someone come help my daughter, a sustained alarm could have been set to send an alert to the care team only after her oxygen levels dipped for more than one consecutive minute (or another predetermined threshold). It was evident to me that delivery of actionable alarms can indeed help speed response times to improve patient safety and satisfaction while also reducing alarm fatigue.

My daughter made a full recovery, but this experience was more stressful and anxiety-ridden than it needed to be, both for my family and for the clinicians caring for my daughter. It opened my eyes to the overwhelming number of alarms and pressure clinical teams face on a day-to-day basis, and the incredible potential for intelligent alarm management to reduce alarm fatigue and improve response. I feel very fortunate to work with technology that is making a difference in patient and caregivers lives every day. 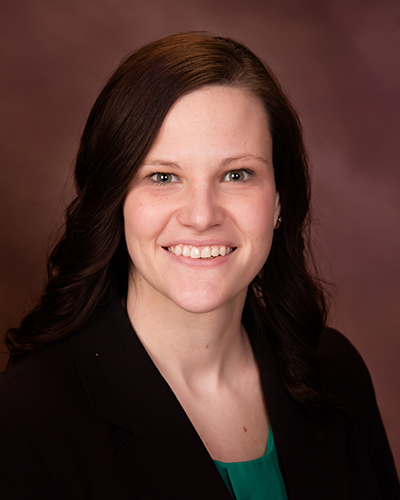 By Kelsey Arhart, Senior Global Marketing Manager
Kelsey Arhart is a senior marketing manager at Spok with more than a decade of experience in the marketing, international, and healthcare IT fields. She is passionate about helping hospitals globally improve clinical communications to provide better patient care experiences and outcomes. Kelsey has been with Spok since 2010 and is currently focused on educating healthcare organizations on the positive impact technology can make. Connect with Kelsey on LinkedIn.

My Experience as the Patients Father

From Doctor to Patient: A Reminder of Why Healthcare IT Matters